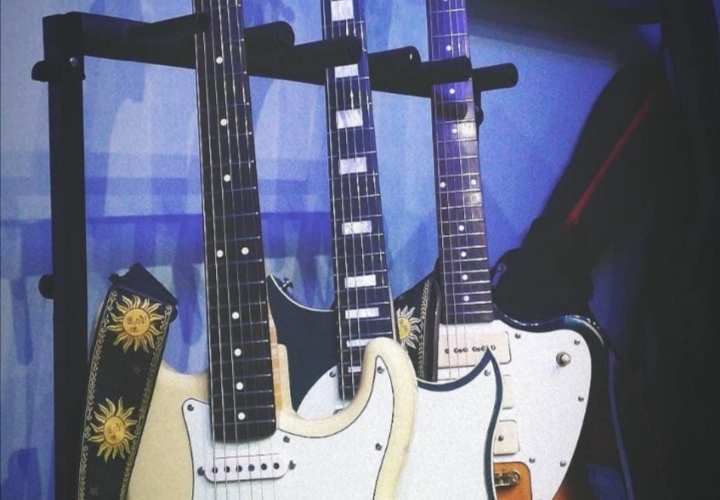 Last Thursday & Friday, I was back in the studio with the Nick Gladdish Band, as we finally started work on his new album Last One Get The Lights.

In normal times, this would have taken place in April, and by now, we’d be on another tour supporting the finished product. In fact, we already released the lead single Blurry Lines last last year (listen to it here). However, the pandemic and subsequent lockdowns have held everything up. More recently, we’ve been able to get back on track.

To start with, Nick shared demos of the songs, and we started listening and thinking of suitable parts. A few weeks ago, we held two days of rehearsals where we tried out different things to see what worked. These were recorded as draft ‘rough cuts’ and the best arrangement shared amongst ourselves, so we could refine our parts further. It also gave me time to consider the best way to record the guitars, and which instruments to use.

Here’s a few pictures from the two eight-hour days at Traxx Studios in North Tyneside. We spent these days recording the main backing tracks of drums, bass, most rhythm guitars, keys and guide vocals. The credits belong to everyone in the band (I’m not sure exactly who took which picture in some cases):

The whole recording process came together really quickly. In two days, we manged to get all the backing for the eight ‘full band’ tracks down, as well as additional rhythm guitar parts. Having rehearsed and arranged this set of songs in a live room setting, the guitar parts were quite simple to arrange and organise for tracking.

The initial plan was for John (Timney, drummer and engineer for this LP) to crew te rough mixes from what we had before we started on overdubs. However, the government’s announcement at the weekend, telling us we’ll be back in lockdown from Thursday, prompted a change of tack.

Instead, I will be going back into the studio with John to lay down all the guitar overdubs and solos tonight.

Tomorrow, Nick will record all of his vocals and a few additional piano & acoustic guitar parts. Shannon Powell, our backing singer at the live shows, will add her final parts remotely in the next week or so. That way, John has the whole period of lockdown to mix and master the record, and we can have the entire album finished in time for release at the start of 2021.

I’ll post some more pictures from tonight’s session, as well as further updates, in due course. Until next time…