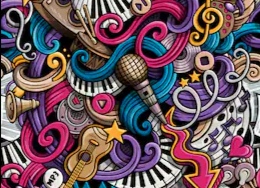 I love artists who create works that cross the boundaries of genre, style, and in some cases, medium. Most people do.

Others, of course, are faithful purists to their favourite genre. But for the rest of us who take our influences from all manner of avenues, how do we categorise our music?

There’s a good argument that genres are only useful to music journalists and lazy audiences. Why should everything be boxed up and potentially limited by increasingly narrower definitions? However, the key argument for explaining how your music sounds is simple: to build an audience.

Pick a genre (or three)

Truth be told, there is strong chance that your music could probably be catogorised under one of these common genres:

These terms are wide catch-all umbrellas, into which various sub-genres fall – just think of all the different kinds of Classical music or Jazz which exist! Try zooming out and imagining where you’d expect to find your music in a retail store. If you feel your music crosses between these larger genres, use more than one – but no more than three.

There exists another category, increasingly referred to as a genre, called singer-songwriter. This usually refers to a pop or indie artist performing acoustically. If that’s you, say so. If you’re in a band and you don’t know where you sit on the scale of rock to pop, and fear losing potential listeners, perhaps stick to the safe option, and go with Indie?

Of course, it can work the other way too. For every Gospel/Soul artist, there will be one solely residing in the musical world of Minimalist Math-Rock. In which case…

The above image (from an interesting article you can read here) barely scratches the surface of the wide, weird & wonderful world of sub-genres.

Remember: You don’t have to stay in one genre forever

The best artists started out doing one style, usually very well, and growing from there. The Beatles were a ‘beat’ group (guitar pop rooted in rhythm & blues), but they soon went far beyond this. Even the famously ever-changing David Bowie’s first few albums from the sixties were of the classic singer-songwriter + band vibe. Without a base to jump from, you can’t expect to get much further than where you are right now.

True, the music industry is very different now. Artists aren’t given the opportunity to find their voice over the course of several albums. But there is still the option of playing live* to an audience, as well as other bands on the bill.

(*or, should I say, there WILL be the opportunity to play live again once we are all out of lockdown – TH, writing in April 2020)

Regular gigging allows you to work on your songs and develop your sound with each passing gig. It should also bring you into contact with new fans, who will be able to describe your music (in terms of genre) much more efficiently than you may be able to yourself. You never know, they might even invent a brand new sub-genre just for you!